We are pleased to bring you the following new features in this week's release. See a summary of feature enablement for this release below.

Features in this section are changes to the Data Entry tab, a working area for investigators and clinical research coordinators to enter study execution data.

This change applies automatically. If Item-level Intentionally Left Blank was not enabled in your vault, it is now enabled.

The following are new features for Coder, the clinical coding area for Vault Coder.

With this release, the Unique Terms Report feature is now automatically enabled in all vaults.

This feature is automatically available.

Features in this area apply to Studio, the study design and configuration area for Vault EDC.

This change applies automatically in new Studies (created after 22R1). For Studies created prior to the 22R1 release, this feature must be enabled using the Enhanced Query Scoping field on the study’s Study Configuration record.

With this release, we made changes to the method for configuring event windows to alleviate difficulty in configuring windows for repeating Event Groups (cycles).

Study designers can now choose from the following for Offset Event (as radio buttons): 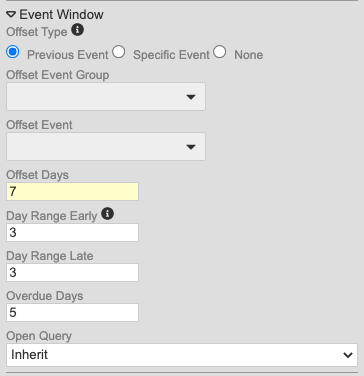 These changes allow users to define windows for Events within repeating Event Groups (cycles). They also reduce study development time by providing the ability to calculate the window based off of a previous Event, instead of selecting a specific Event each time.

These changes apply automatically. Because we upgraded the configuration of existing event windows, study designers should review their configurations where an Event is used in multiple Event Groups after the release, to ensure that the windows were migrated correctly. If possible, organizations should identify these Studies prior to the release to prepare for these changes.

Features in this section apply to EDC Tools, a study-level administration area for Vault EDC.

In addition, Vault will automatically back up the Study Design before deleting the study environment. The backed-up file will be available in Deployment History.

This enhancement will clearly distinguish each inline action menu.

With this release, we refreshed the UI for creating Connections to FTP servers in EDC Tools. We updated our data model for storing external connections. Vault CDMS now supports the following connection types:

For External FTPS type connections, users need their own FTPS server enabled using Passive FTPS. Users need their firewall ports open to ports TCP 21 for the control channel and 56000-56100 for the data channel. If users need a specific port range open, there is a process for submitting a request and getting security approval.

To configure a CDB Workbench connection, the vault must contain the CDB application. As part of this enhancement, the process to create an FTP destination for CDB exports has changed.

Users can send exports like Study Data Extract and Code Request exports to their external FTPS server in addition to the Veeva Vault FTPS server.

Features in this section are enhancements to deployment functionality in Vault CDMS.

If a user deletes an environment in error, this enhancement will restore the study design. The Restore option is only available in a development (DEV) environment.

This feature is automatically available.

The following are new features for the Vault Data Workbench application, the Vault CDMS solution for data cleaning and reporting.

To ensure that data being imported into CDB doesn’t change from the approved format and structure, CDB detects any changes to package configurations from one load to the next for each third party Source.

If the system detects changes in configuration at the package, file, or blinding level, or changes in the CSV file structure, CDB pauses the import process. The package isn’t processed and enters the Paused status until a user with approval rights either approves or rejects the package. If the user approves the package, CDB records the approval reason and imports the data package. Once a package is approved, CDB notifies subscribers to the approved change via email. CDB displays a change indicator on all associated Listings and Views. Users are able to dismiss this indicator and download the form change log for any listing or view. If the user rejects the package, CDB records the rejection reason, marks the package as Rejected, and assigns it the Not Imported status. CDB then reverts to the last successfully imported data package for the Source.

For the first uploaded package in a new Source, CDB automatically applies the Paused status, and a user must approve or reject that first package before any data from that Source appears in the system.

For packages requiring approval, Workbench now includes a Package Detail panel with tabs for Differences and Associated Objects. The Differences tab displays the changes in the manifest between the current and previous packages. Users can review the previous and current value of the changes that they’re approving. The Associated Objects tab displays the Export Definitions, Listings, and Views that the changes in the package may potentially impact.

To approve or reject an import package requires the Approve Import permission, which is by default assigned to the standard CDMS Super User and CDMS Lead Data Manager study roles.

Allowing the system to automatically detect changes in an import package helps prevent accidental or unintentional changes from occurring. For example, a change in the blinding configuration can potentially unblind a study. Requiring approval prevents changes being applied before stakeholders are aware and able to address needed downstream updates.

This feature is automatically enabled.

An Export Definition consists of Export Listings, that are snapshots of the parent listings. When a parent listing is updated, in some cases, the export may become out of sync with the parent, leading to outdated listing structure in export packages. For example if upstream, a custom listing design was updated, any Export Definitions that reference that custom listing will still reflect the original listing design. If the CQL is modified for an Export Listing, that listing is also considered impacted, or out of sync, with the parent listing.

With this feature, CDB flags Export Definitions that have been impacted by changes. CDB provides a quick filter to easily narrow the export definition list to only those that have been impacted. When a user opens an Export Definition, CDB shows an indicator on Export Listings that are impacted by changes. Users can use the quick filter to display only the impacted Export Listings. The impacted flag indicates that the export listing’s CQL is out of sync with its parent listing’s CQL. Users can sync select Export Listings with their parent listings, or in bulk as a batch action. Once synced, CDB removes the impacted flag from the listing. Optionally, users can review the differences between the two CQL statements without navigating away from the Export Definition.

This feature allows users to easily identify and sync the Export Listings that have been impacted by changes to the CQL of their parent listings, reducing the possibility of outdated data sets in export packages.

With this release, we added the following new attributes for CQL:

These CQL attributes are automatically available.