Users with the standard CDMS Lead Data Manager application role and a Security Profile that grants access to the EDC Tools can perform the actions described above by default. If your vault uses custom Application Roles, your role must have the following permissions: 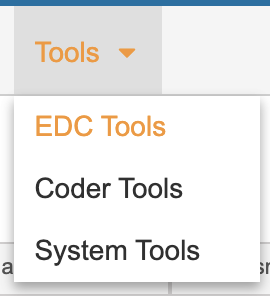 Vault EDC’s casebook versioning feature allows studies to iterate on their designs. A study team can publish and use an initial version of the study, and then if changes are required during execution, they can amend the design with a new version.

Whenever your sponsor makes a change to your study design, you can use casebook amendments to update your sites to use that new version.

With retrospective casebook amendments, Vault updates all existing casebook data to reference the new version, modifying any previously collected data to comply with the new version. For example, if a new version removed the Secondary Baseline Visit form from the study, a retrospective casebook amendment would remove the Secondary Baseline Visit form from any existing Casebooks, even if the site already collected data for that form.

From All Versions, you can view a list of all existing Casebook Definition versions for your Study. You can see the number of subjects and sites active on each version.

From Amendment History, you can view a list of all past amendments within your study. You can use this subtab to review past amendments, including which Subjects and Sites were impacted, and view summary and log files for each amendment.

You can choose to group amendments by Site or None (the default grouping). When you group by Site, you can easily see the number of amendments and updated Subjects for each of your Sites.

Once a study designer has published the initial version of your Casebook Definition, and, if applicable, imported it from a development to production vault, Vault automatically assigns the most recent, published version available to newly created sites.

For example, if you created two sites in January 2019, when there was only one published version of your study, those sites were automatically assigned to that first version. Since then, there were two more versions added to your study. When you create a new site, Vault automatically assigns the new site to the most recent version, Version 3.

Update the Active Version for a Single Site

To update the Active Version of a single Site:

To update the Active Version of multiple Sites:

How to Initiate a Retrospective Amendment

Once a study designer has published a new version of your study, you can deploy it to sites using a retrospective casebook amendment. Note that Vault does not apply amendments to locked Casebooks or Forms. Frozen forms may become unfrozen if an amendment updates the form.

Prerequisite: Before you can initiate an amendment, the version that you want to use must be available in your environment and you must first update the Active Version of any site you’re upgrading.

To initiate a retrospective casebook amendment:

Note that retrospective amendment jobs can’t run for more than 24 hours. The number of casebooks that can be run per job is dependent on the size of the study.

If you chose the Leave as Submitted for Status for Changed Forms option in step 9 above, submitted Forms remain in the Submitted status.