The Study Data Extract job allows data managers to extract and download study execution data from EDC Tools. You can choose to download your data as a CSV or SAS file before running the job. Note that the encoding for CSVs is UTF-8.

Each clinical dataset, and each Form (Adverse Events, Concomitant Medications, etc.), contains a set of Key Columns and a set of Clinical Data columns, which are detailed below.

Key Columns contain data to help identify which Form each row is referring to (ex: which Subject, Site, Cycle, or Event that particular form is located in).

*Datetime columns can be separated into two separate Date and Time columns.

After the Key Columns, the system will insert Clinical Data columns, with each column representing an item on the Form.

Clinical Data Item Headers use the item names or external ID defined in Studio. Some items can be associated with more than one column, depending on their data type:

Booleans: Boolean items always have either a Y (true) or N (false/null) value.

Unknown parts in dates and datetimes are represented by UN in ISO format:

You have the option to exclude blank forms from your export.

All casebook versions are displayed in Study Data Extracts, so items that were deleted from the schedule in subsequent casebook versions will still appear in Clinical Datasets. This inclusion guarantees that all data is extracted, even if certain subjects were kept on a previous casebook version.

If a form is set up for coding, meaning that a coding configuration has been defined in Studio, coding-related columns will be added after clinical data columns. If there are multiple verbatims set up in a form, the system will add a set of coding columns for each verbatim configured. If the same item in different item groups is configured for coding, the system will add “itemgroup.item” to each column header to indicate which set of columns belongs to which verbatim.

The Study Data Extract ZIP file contains a definition file, which is a listing of all columns across all datasets included in the extract.

The SYS_SITE dataset lists all sites for the selected study.

The SYS_SUB dataset lists all subjects for the selected study.

Please note that the LATESTARM, LATESTCOHORT, and LATESTSUBSTUDY columns will only display if you have Arms & Cohorts enabled.

The SYS_EVT dataset lists all events as well as event dates and status for the selected study.

The SYS_FORM dataset lists all forms for the selected study, including forms Intentionally Left Blank as well as review statuses, freeze and lock statuses, and additional metrics.

The SYS_Q dataset lists all queries for the selected study, along with some query metrics. Only the first query message is listed in this dataset. The full list of query messages (first message, answers, etc.) is included in the SYS_QT dataset.

The SYS_QT dataset lists all query messages for the selected study.

You can link the content of this file with the SYS_Q dataset using the QUERYID column. There can be multiple SYS_QT records matching one SYS_Q record (i.e. a query in SYS_Q can have multiple query messages in SYS_QT).

The SYS_ILB dataset lists all items that have been marked Intentionally Left Blank in the selected study.

The SYS_LINKS dataset lists all forms that belong to a form link in the selected study. Forms that are linked together will share the same link ID, which will display in the GUID column. The form unique identifier (FGUID) can then be used to identify a specific form and access its data.

The SYS_ASM dataset lists the following information about assessments, if assessments are configured for a Study.

The SYS_ASMR dataset lists questions and answers for all assessments in a Study, if assessments are configured.

The SYS_LABRANGES dataset lists the following Labs information, if Labs is enabled.

The SYS_LABLOC dataset lists the following Labs information, if Labs is enabled.

The SYS_ANALYTES dataset lists the following Labs analyte information, if Labs is enabled.

Below are statuses and their descriptions for forms, events, and queries.

Key columns use fixed conversions to either num or char SAS types, whereas clinical data columns are converted to a specific SAS type based on the item data type in EDC.

You can specify up to 3 directory paths in the FTP connection configuration. The default path is vaultloader, which places the file in “/root/u(userid)/Study Data Extracts” for the SDE.

Please note that the default behavior for Vault Owners is to place the files in the user’s root directory, not in the /root/u(userid)/. For example, files would be placed in /root/Study Data Extracts if the directory is vaultloader. 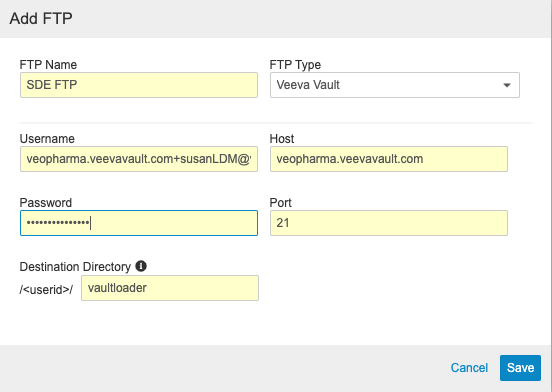 Pictured above: an example configuration for SDE with a default destination directory path of vaultloader, which will place files in the /Study Data Extracts folder. 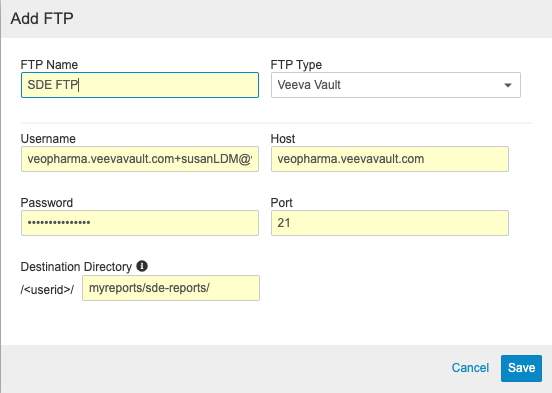 Pictured above: an example configuration for SDE with a destination directory path with multiple levels.

To configure a connection, see Connecting to an FTP Server from EDC Tools.

You can include custom objects in your exports by adding records to the Study Data Extract Custom Object Config object in Business Administration where you must specify the Name of the record, custom object name (objectname__c), and the Study that you’re going to run the SDE for.

Once you’ve configured a custom object and run the SDE job, you will receive a file named CUSTOM_

The order of the columns in the custom object file follows the Page Layout configuration, with the exception of the GUID of the object always appearing at the beginning of the file.

Duplicate column names are appended with an _2, _3, etc. to prevent column name conflicts.