Vault CDMS offers a security model allowing users to have different roles in different studies. This model leverages the Application Role object to define user access at the object level (in this case, the Study object), instead of at the account level. Your Application Role extends your permissions granted by your Security Profile. These combined represent the Study Role, a permission grouping that you can manage from Tools > Role Management.

Contact Veeva Support to enable Role by Study in your vault.

In the Role Management tab, Vault CDMS displays Study Roles and their permissions as a table. Each column represents a Study Role, and each row in the table represents a functional permission.

In the current release, Vault does not display any permissions related to custom objects or tabs in Role Management. 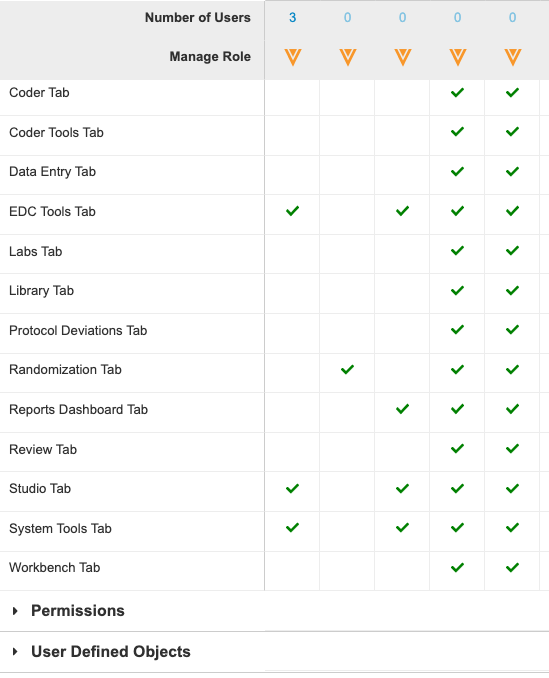 For each Study Role column, Vault displays the number of users that are assigned that Study Role in the Number of Users row.

You can click on the Number to view a list of those Users. From that dialog, you can filter the list by Study or search for a specific User.

Vault groups functional permissions together. For easier viewing, you can collapse and expand sections as you scroll through the page.

Click the Collapse () or Expand () buttons to collapse and expand sections.

This table lists each functional permission and a description of what it controls.

You can control access to various application functions from the Functions section of the role table:

Permissions in the Functions section

You can control access to the following standard tabs from the Standard Tabs section of the role table:

Permissions in the Standard Tabs section

The following Study Roles are standard and available as part of the CDMS Role by Study feature.